I found out about this thing while reading a web page about the Newport Tower. The problem, these days, is that everyone is an advocate for evidence supporting what they already believe, taking everything for "proof" of the wildest theories. This is supposed to be an inscription left by Wayward Northmen in the 1400's. We decided to check it out. 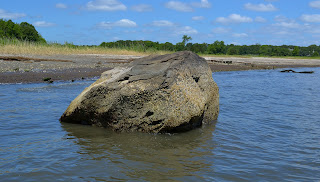 There is no public access to the shore in this area. We parked at the Country Club, and cut across the golf course as inconspicuously as possible. I had some misleading directions from another blog.

We found this boulder. It looked like a good place to carve an inscription. I waded to it, and found no trace of an inscription, or, it looked as if any inscription would be underneath an inch of barnacles. I should have listened to my friend, who opined that it "didn't look like the picture". Lesson learned: When "determination" becomes "stubbornness" , you may fail.

I returned today.  On a whim, I decided to hike a little further north on the beach (contradictory to the "directions), and voila! there was a beach just like the picture!  The "real" rock seemed much smaller and lower than I would have imagined, and the bluff behind the beach had lots of put-there-deliberately seawall-type stones. I read that the Rune Stone was discovered by clam diggers, and sure enough, there were some in the vicinity. Waded out, scraped a little with a brush, and easily found the "Runes". 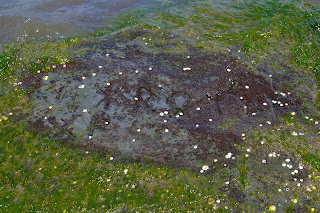 This rock would really be invisible at high tide. This being a New Moon low tide, I actually had to time my photos in between waves. Saw some other marks, probably made by others clearing away weeds.
It seems as though Runes are difficult to translate. One rune can mean two things, and a message in Runes does not contain all the parts of a sentence: one must liberally insert them. Here's one translation I found:
UPPERLINE
Rune 1. GIFT (G)
Rune 2. SUN (S)
Rune 3. LAND, ISLAND (H)
Rune 4. RIDE, RED, RHODE (R)
Rune 5. HOME, PROPERTY (0)
Rune 6. MAN, MEN (M)
Rune 7. LAKE, SEA, OCEAN (L)
Rune 8. ICE, ICELAND (1)
LOWERLINE
Rune 9. GIFT (G)
Rune 10. GOD (A)
So, the correct TRANSLATION appears to be:
"GIFT of the SUN: RHODE ISLAND (Red Land), now HOME (property) of the MEN across the OCEAN from ICELAND; GIFT of GOD"

This is,of course, hotly debated online. Two things I thought that I knew: That The Northmen were suspected to have extended their  explorations along the American coast, possibly as far south as Mexico, but there was "insufficient evidence" to prove it, and that Rhode Island was named by English speakers in the seventeenth century, after Rhodes, Greece. It also seems that "Rhode" means "Red". Might these Northmen, accustomed to the black sand and gravel of Iceland's coast, interpreted the brown sand and mud flats of New England as "red"? Or the natives?
Then there is the matter of "The Hooked X". This Rune was recently discovered in Europe, and appears in inscriptions In Rhode Island and Maine. If a hoax, the Stone shows many decades of wear. I also don't know what the probability of a carving from the 14th century surviving that long in the water is.
As a hoax, the Hoaxer would have had to have enough knowledge of Runic to tap out a fairly coherent message, including the obscure "hooked X". Most hoaxers want attention, and this one has sought none (unlike the crop circles).  It doesn't seem to be a very good place for an inscription, and it was only discovered in the 1980s. I also find the use of "Red" kind of suspect, as above mentioned. I'd also be more encouraged if it was discovered in the 1600s, instead of the 1980s.
Encouraging: The admixture of Pagan and Christian symbology. The Vikings had been Christianized by that time, but oddly held onto their Pagan roots. I'm doubting The Hoaxer's creativity, in throwing in that little bit of mystery.
It still starts my imagination: A failed, one-way expedition comes to an end in this bay, and the survivors give thanks for being stranded in a not-too-terrible place.

Update, July 2, 2012
I returned with my friend last week, to look for the stone, but I couldn't find it, which seems very weird, because it was perfectly obvious, once I had looked in the right place . We agreed to return on a spring low tide (today), and still couldn't find it!  It seems to be gone! I found this bit on a webpage:

"The following photographs show the Narragansett Stone at low tide and an early photograph of the
Narragansett Stone taken by Malcolm Pearson. In 2007 Mr. Rick Lynch, a former officer of NEARA, was taking
steps with the State Agencies in Rhode Island to remove the stone from the tide water and the author supported
him in this effort. However, it is always difficult to get state permission to remove objects in tidewater and the
project is apparently still pending. There may well be other runes on this heavy rock on either the sides or on the
back and it is certainly worth a look."